Introduction to the 2022 Pricing Doc

In Canada, annual prescription medication costs were over $34 billion in 2019.1 Roughly 45% of that spending is financed by the publicly funded drug plans. Much of this spending is on treatment of chronic conditions predominantly cared for by family physicians2,3 and high-cost medications used by a minority of Canadians.

While generic medications make up ~78% of public drug claims, generic medications/biosimilars account for only ~30% of spending. Brand name medications and biologics represent only ~22% of claims but ~70% of all costs.1 Almost 40% of public drug dollars are spent on ~2% of Canadians, 60% of who are using drugs that cost $10,000 per year or more. The top three drug classes (biologics, hepatitis C and macular degeneration medications) are used by ~1% of the population, but account for almost 20% of total drug spending.1

Canada has the second highest spending per capita on biologics in the Organisation for Economic Co-operation and Development (OECD), and one of the lowest biosimilar use rates of OECD countries.4 While over 90% of patients in some European countries are using biosimilar products, only 8% of Canadians who require biologic/biosimilar are on biosimilars4.

Best evidence demonstrates similar clinical outcomes for patients starting on biosimilar or originator biologic or switching from originator to biosimilar.5 In Alberta, we estimate if 90% of patients on infliximab and etanercept were transitioned to their corresponding biosimilar products, we would save at least $50 million annually.5 Similarly, if Ontario were to substitute biosimilars for patients already on or starting infliximab, etanercept or adalimumab, an annual cost savings of ~$275 million would be realized.6 British Columbia appears to have most successful biosimilar program launch in Canada7 – with no signal of increased health services spending for patients post switching.8

Another source of increased costs is the use of “me too drugs”; drugs within the same drug class which are similar to pre-existing drugs, but often marketed as having benefits in side effects or efficacy. In most cases, these medications are no better than existing meds (and at times worse), but are considerably more expensive. These “new” medications are often tied to the expiry of an existing drugs’ patent thus are introduced in order to maintain pharmaceutical profit. It is rare that medications in the same class have considerably different therapeutic effects.

A national formulary with a focus on cost-effective and evidence-based drug utilization would potentially help curtail some of the impact of pharmaceutical industry marketing on prescribing patterns. New Zealand has a rigorous national formulary system focused on evidence based on clinical outcomes and cost-effectiveness.9 A comparative analysis of Ontario and New Zealand drug spending found that if Ontario implemented a comprehensive formulary management system like that of New Zealand, the annual savings just for three classes of medications (statins, PPIs and ACE inhibitors) would be >$370 million.10 Canada is currently the only OECD nation with a universal health insurance system but no national pharmacare program. Adopting a national pharmacare program would save approximately $4 billion annually in prescription drug costs.11

With this in mind, we are pleased to update our Price Comparison of Commonly Prescribed Pharmaceuticals in Alberta. We encourage prescribers to consider costs (and medication coverage) when treating chronic medical conditions and especially when choosing between therapeutically similar medications.

In addition to considering lowest cost alternatives, other ways of decreasing drug costs include:

Specific examples of where prescribing changes can substantially decrease unnecessary pharmaceutical spending without negative patient outcomes include the following: 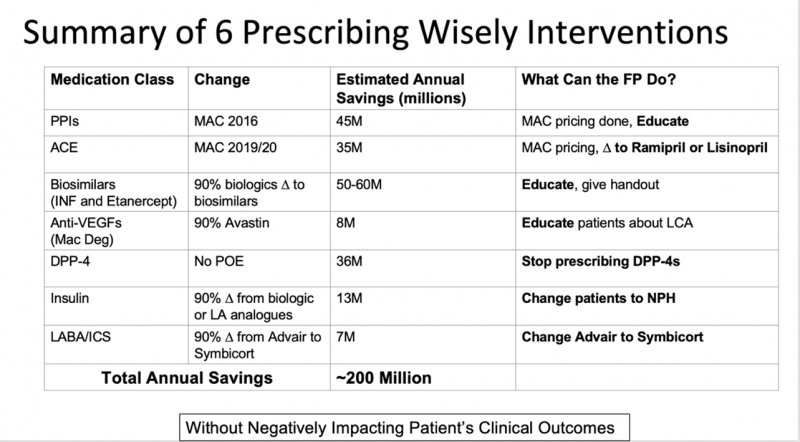 In this document, costs listed are primarily for the generic product (with generic name bolded) as provincial drug plans will generally only pay for the lowest cost formulation. Brand name prices (with brand name bolded) are for products still under patent protection. We also provide information on coverage by Alberta Blue Cross (BC) and Indigenous Affairs (IA) formularies and which products require Special Authorization (SA). Medications that are not covered (NC) are paid for entirely by your patients.

The prices, rounded to the nearest $5, represent the entire retail cost of the prescription filled at a community pharmacy in Alberta, including markups and dispensing fee. This does not reflect what a patient would pay if covered under a drug plan, but rather the cost to an individual without coverage, or to the health system. The reported price reflects the maximum allowable dispensing fee charged under provincial regulations. Some pharmacies may charge less than that, but this tool allows for relative cost comparisons between medications in the same class or for treating the same condition. This list is updated annually by the authors, with the cost updated monthly by Alberta Blue Cross.

For jurisdictions outside of Alberta, please consult similar pricing documents (Manitoba, Newfoundland and Labrador). We encourage other provinces without similar documents to compile a similar document.
Please contact your local pharmacist for information on medications not included that you routinely use in your practice.

Please forward any feedback, including cases where knowledge of medication cost or coverage made a difference to your patients or practice to: mkolber@ualberta.ca or tony.nickonchuk@ahs.ca

5Perry D, Ton J, Kolber M. Tools for Practice: It’s all in the details…or is it? Biosimilars versus biologics for inflammatory conditions. Available at https://gomainpro.ca/wp-content/uploads/tools-for-practice/1559165324_1558969328_tfp236biosimilarsfv.pdf. Accessed July 7, 2020.